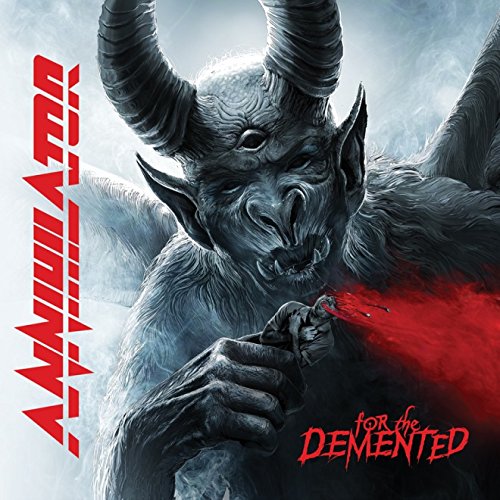 Well, we’re back to the basics for Annihilator.  Annihilator has always been Jeff Waters and on this most recent release, he just stripped away the pretense and just handled everything on the album himself.  Sure, there are band photos of Jeff and some dudes that look like they can’t legally drink yet on the album liner.  However, let’s cut the shit.  There is only one band member.

I hate to be an ass, but I’m ever so glad that vocalist Dave Padden has gone on his merry way to a non-Annihilator life.  Nothing against the guy personally.  I’m sure he is a wonderful person, but his vocal style just never translated for me.  His style always teetered on an over-the-top sort of jokester vibe.  Like, this whole metal thing was just sort of a tongue-in-cheek endeavor for him.  It just brought the quality of all of the Annihilator albums he appeared on down a notch or two.

So, with Padden out the door, Waters has re-assumed the role of lead vocalist in addition to lead everything else.  Results?  This isn’t going to rank among the greatest of the Annihilator catalog, but it is definitely a step in the right direction.  It’s by far the best Annihilator album since 2001’s Carnival Diablos.  Waters’ hyperactive guitar riffs and searing leads are all present along with multiple songs dealing with mental health issues.

This isn’t the album I would recommend for someone just getting into Annihilator, but for long time fans who are wanting a fresh dose of that Waters aggressive thrash, this’ll do in a pinch.