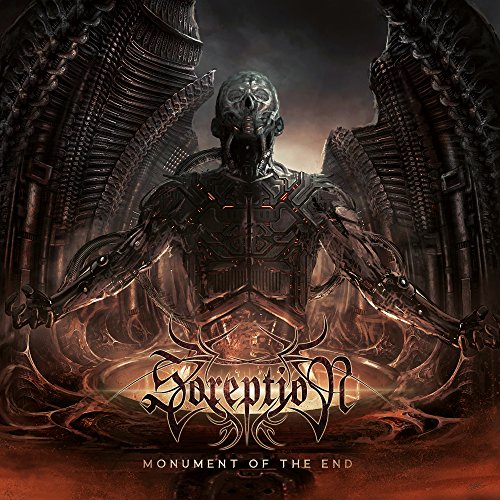 Disclaimer:  This one may get away from me a bit.  I want to be fair to the band and album at hand, but I also want to touch on how this album encapsulates an issue that inflicts a good deal of metal, especially that which comes from the death metal realm.  Thanks for your indulgence on this issue.

Let’s start off with the album at hand and then we can get into the larger issues it presents.  Soreption is a technical death metal band from Sweden.  This album overall fits right in line with a lot of the other bands trading in this type of death metal today.  The band is tight.  They are professional.  They are proficient and masters of their instruments.  The complexity and the arrangements of the songs are impressive.  If it sounds like there is a “but…” coming, well, that’s because there is.  As impressive as the individual parts of Soreption are and as tight as the performances are on this album, the songs just aren’t there.  That’s harsh, I know, but that’s just the honest impression I got after listening to this one a couple of times through.  Everything on here just seemed to run together once I got a few songs in.  Right now, I can’t honestly recollect anything specific from the album.  Like, there’s not a song on here that really made me want to go, “Damn, I can’t wait to jam that one again.”  I don’t know.  I could be completely missing the boat, but it really feels like a forest-for-the-trees sort of album.  The individual parts are cool, but the cohesive project feels lacking.

To my larger point mentioned at the beginning:  I find myself feeling this way a lot from bands in the technical death metal sub-genre.  I think the focus on technical skill gets in the way of crafting well-written songs.  It’s a really fine balance to blend crazy time signature changes and super charged solos with finding a hook, melody or riff that is the foundation of any good song.  There’s got to be that solid foundation upon which everything else gets built.  I think you can take this same issue back to the mid-80s when dudes like Yngwie Malmsteen were coming out the woodwork.  Yngwie was a hell of a talented player.  The first time I heard Rising Force I was blown away by dude’s chops.  But after a while, the flash of his solos wore off once you realized that dude couldn’t write a decent song or riff.  I think it’s evident in the fact that Yngwie’s career basically stalled after the late-80s.  He had one trick and once the initial hoopla died down, there was not much substance upon which he could rely.  He was also a bit of a egomaniacal prick.  So, that didn’t help much either.  Compare Yngwie’s career to that of AC/DC.  No one is going to characterize AC/DC as a technical powerhouse.  Shit, everyone always jokes that every album they put out is basically the same album.  But, goddamn, can we acknowlege that they could write a fucking riff that would just get stuck in your head and never leave.  They also paired this riff writing genius with a healthy dose of sass and blue-collar personality.  They were real and they had a rock solid foundation that has stood for years.  Go put on TNT or Back in Black or Dirty Deeds or Jailbreak.  It’s the fucking riffs, man.  It’s the fucking riffs.

I think that’s the main point I’m trying to make to bands like Soreption and other bands who, in my opinion, focus way too much on the technical side of things.  Pull it back a bit.  You can still blow us away with solos and double-bass pummeling, but try to integrate the flash more in a way that furthers the impact of the songs rather than just trying to outdo the other bands in your genre.  You guys can do it.  You have the talent.  Just harness your creative powers and instead of creating what is ultimately an album that is going to get lost in the rabble of all the other technical death metal releases this year and create something that has staying power.  I believe in you guys!