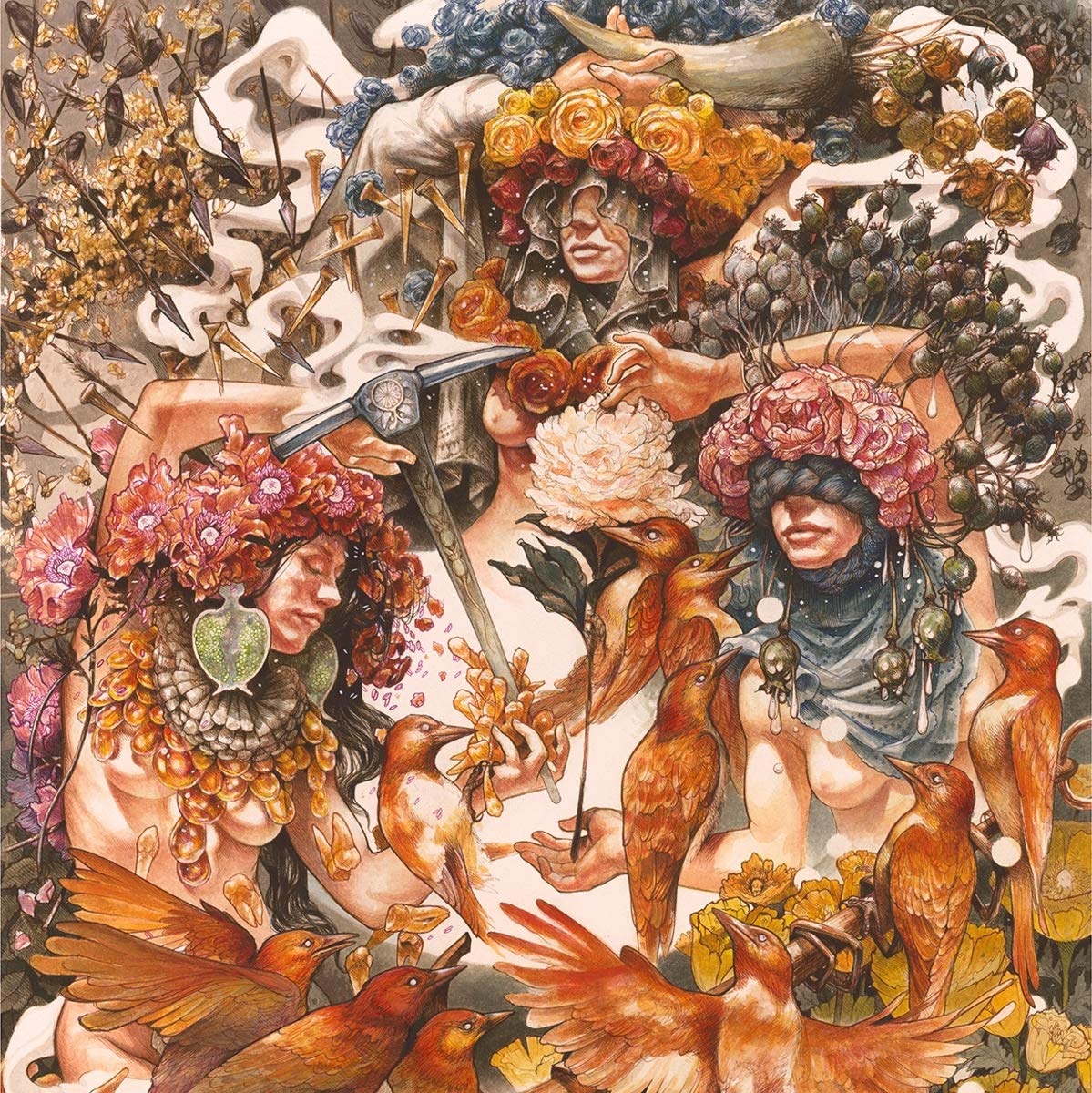 So, we find Baroness wrapping up their color-themed string of albums with Gold & Grey.  And let’s just start with the above artwork of John Dyer Baizley on this one.  It really feels as though his cover art for each album just continues to get better and better with this current one being the pinnacle of his work so far.  Simply stunning art.  It would be awesome to have a collection of all five album covers.

On to the music enclosed.  I have really been a fairly big supporter of this band over the years and I still feel happy with my choice of naming Yellow & Green the album of the year back in 2012.  However, Baroness’ last album, Purple, kind of fell flat on my ears.  There were some decent moments, sure, but the material just never quite elevated to the level of creativity laid down on Yellow & Green.  After sitting with Purple for 3+ years now hasn’t done much to change my opinion on it.

So, here we find ourselves years down the road from the last album and I’m really hoping that the time spent away has helped the creative juices flow and that this latest platter will end up being something special.  We have one new personnel change of note in that this is the first album to feature Gina Gleason on lead guitar after she replaced longtime guitarist Pete Adams.  So, to start, let me say that I feel like the new album is a step in the right direction and it feels like the material has a bit more heft than from what we heard on Purple.  However, it still doesn’t quite reach the level of magic that was Yellow & Green, let alone Red or Blue.  The biggest problem isn’t with the songs themselves, but with the mixing and production.  Simply put, the mix is just muddy as shit and it absolutely kills the songs.  The guitars are just shoved so far back in the mix that it is downright hard to make out what Baizley and Gleason are doing, especially on many of the more uptempo songs.  For whatever reason, the decision was made to put the bass and drums way out front at the expense of everything else.  In addition, there is just a layer of distortion thrown over the entire production that simply makes the entire album sound as if it was recorded in a cavern.  And, during the entire process of listening to the album a couple times through now, it just absolutely drove me nuts.  Because all I could think is “How good would these songs be if they had the production values of their past albums?”  Are the songs being destroyed by a shitty mix?  It sure as hell feels so.  As stated, the mix kills the more uptempo songs more than the slower and acoustic-based ones and, as a result, the softer moments on the album are the more memorable ones.

In addition to the mixing issues, you’ve got 17 tracks in total with around 11 of them being proper songs.  You’ve got around 6 small instrumental segues in between songs that are classified as individual tracks but really feel more like filler ideas that didn’t make it into actual songs.

I don’t know.  I’m really disappointed with this one.  Primarily, because I really feel like the presentation of these songs could have been done in a much better fashion.  It just feels like a missed opportunity.