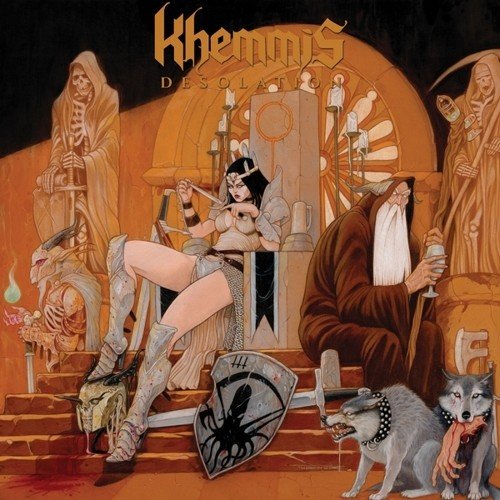 Khemmis feels like it is the underground metal world’s band for whom everyone is rooting.  They seem like that little band that could.  I can’t think of any negative press I’ve seen associated with them.  I tend to find myself grouping them in with fellow doomsters, Pallbearer.  Whereas Pallbearer transacts in what I’ll call “dooooooooom metal”, i.e. reeeeeaaalllly slow songs and thoroughly bleak outlook, Khemmis’ brand of doom is a little lighter.  Not in the sense that its songs about puppies and rainbows.  They are definitely a doom band, but one that seems to have a significant traditional metal influence on their sound.  I hear lots of Dio and Iron Maiden coming through in both the presentation, sound and imagery of the band.  The guitar sounds and song structures are not so much a dirge as other doom bands of our current era.  There is a liveliness to the songs that differentiates their music from the coffin-like suffocation that can inflict some doom bands.

This latest album finds the band with their third full length release.  Their previous album, Hunted, ended up very high on many year-end lists in 2016.  So, the pressure to match or surpass that album had to be high.  After a couple of listens, I feel like the latest album is in the same ballpark as their first two albums, but might be a tad behind their other releases.  It is definitely exploring the same ground that their first two albums tilled.  You’ve got six songs in total.  All lengthy and all epic in scope.