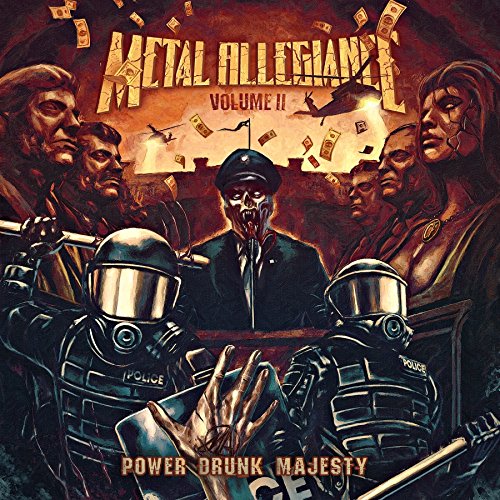 Another entry in the Metal Supergroup genre.  It seems like this sort of thing is just becoming the rage of late.  I guess dudes just get kind of stagnant in their main gigs and find these side projects energizing.

Anyway, this project is kind what I feel is the supergroup of supergroups in that it is an ever evolving beast.  This thing started out as the brain child of a dude named Mark Menghi, who from best I can tell is just a bass player/creative type dude living in Long Island, NY.  Somehow, he managed to wrangle in Mike Portnoy (ex-Dream Theater and a multitude of other projects), Dave Ellefson of Megadeth and Alex Skolnick of Testament to form the core of what is Metal Allegiance.  At first these guys would round up a group of friends from throughout the metal world and they would put on these one-off concerts were they would play each others’ songs and a bunch of classic metal cover songs.  It seemed like a cool way for these guys to get together and have a good time bonding and playing music with people from other bands that they admire.

Well, a few years ago, they sat down and decided to morph this idea into something a little more substantial by delivering a full album of original songs by the core four members with a rotating cast of vocalists.  The interesting thing about the original songs is that they have managed to tailor the different songs for the particular vocalist used on that song.  For example, they came up with a song that sounds a hell of a lot like a song that Lamb of God would come up with.  Well, give Randy Blythe a call and see if he’ll come in and lay down the vocals on it.  Given the star power of the core guys, they have been able to pull in some really impressive names.

On the new album, you’ve got ten songs with the following vocalists taking part:  Trevor Strnad (The Black Dahlia Murder), John Bush (Armored Saint), Bobby Ellsworth (Overkill), Mark Tornillo (Accept), Johan Hegg (Amon Amarth), Max Cavalera (ex-Sepultura, Soulfly), Troy Sanders (Mastodon), Mark Osegueda (Death Angel) and Floor Jansen (Nightwish).  Overall, the album jams pretty good and is fairly cathartic on the lyrical front.  There is a lot of anger coming out about the state of our country.  All of the songs are kind of in that classic mid-tempo heavy metal sound.  The standout tracks for me are the Cavalera (Voodoo of the Godsend) and Blitz (Mother of Sin) songs, both of which will really remind you of the vocalists’ main gigs.